Until 2011, the UK saw a steady rise in the number of non-EU international students that chose to study in our higher education (HE) sector. Unlike EU students, who are eligible for student loans from the UK government, non-EU students tend to fund their own tuition fees, with each one paying an average of £12,000 to HE institutes each year [Evidence]. The Higher Education Statistics Agency (HESA) show that the total number of non-EU students enrolled on courses in the UK topped 302,680 in 2011 [Evidence], which would suggest an income to the UK HE sector of around £3.6bn. This figure is five times the £0.7bn that UK Universities received in research funding that year from the EU [Evidence], and shows just how important international students are to our academic base. 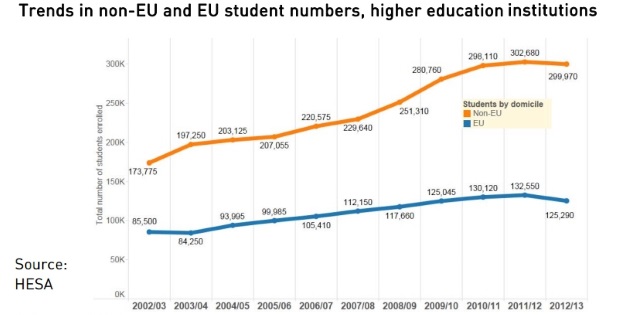 In response to public disquiet about the high numbers migrating to the UK each year, the UK’s coalition government decided in 2011 to offset our inability to control EU migration by imposing greater restrictions on non-EU migrants. The resulting student visa reforms appear to have reversed the strong growth in international student numbers seen in the preceding years. Indeed, a report from Universities UK suggests that we could have expected a continued growth of 15 to 20% over the 5 years following 2011, and an analysis of our main competitors (see graph below) seems to suggest that numbers were indeed likely to increase. If true, then the potential loss of up to 60,000 overseas students would translate to a loss in HE income of around £720 million, which is around the same amount that UK Universities received from the EU for research funding.

It is clear that the income from international students is far more important to UK Universities than that from the EU. Indeed their own report estimates that overseas students contributed around £7bn in 2013 to the UK economy, whilst the EU returned just £4.2bn of our membership fees. Our inability as a nation to control the number of migrants coming from the EU appears to have had a direct and negative impact on our academic base, and many lament the lost global opportunities that come with our membership of the political EU project.

Professional Astronomer with an MSci. and Ph.D. in Astrophysics from the University of St. Andrews. Primarily involved in astronomy education and with a research interest into extrasolar planets.